How to Deal With A Sociopath Effectively?

Now that you know something about their nature, one can think about, how to deal with a psychopath. Here are some thoughts about how you can do that!

Stay Away from Them!
Once you realize you are dealing with a sociopath, the best thing to do is to remove them from your life and stay as far away from them as possible! As you cannot cure sociopaths and beating them at their own game is risking your own life!

Do Not Try to Reform Them
Studies have shown that efforts at curing sociopaths with therapy only backfire! The sociopaths use the therapy in sharpening and polishing their conversational and conning skills. There is no known successful treatment for sociopaths. A person who has a core of humanity left in him can be reformed. People without a conscience, or people who can override the call of their conscience are beyond reform. Most of them are best kept behind bars!

Warn People
If a psychopath has ruined your life and if you feel that you should warn other people before he ruins theirs too, do so at your own risk. Report police authorities if you come across evidence of violence inflicted by the sociopath. The faster they are put behind bars, the better it is. Remember they feed on your fears and emotions and use them to manipulate you. Be fearless, and deal with them coldly.

For those of you, who have been unfortunate enough to have crossed paths with a sociopath, I would like to say that, do not lose your trust in humanity. There is a lot of goodness and beauty in this world which is waiting to be beholden by you. Don’t let sociopaths and other anti social elements bring you down to their level. Deal with them with a cool mind and do not ever hesitate in doing the right thing, no matter how hard it is!

Perhaps the most famous and beloved sociopath we know of would be Lucy from the Peanuts comics. As a child I always related very well to the Peanuts specials when they came on at Christmas time.  The games that she played were exactly mirrored in these specials. Many people have written about Lucy and a quick search on the internet will produce ample analysis for Lucy and her relationships. Wikipedia sums it up quite well;
http://en.wikipedia.org/wiki/Lucy_van_Pelt 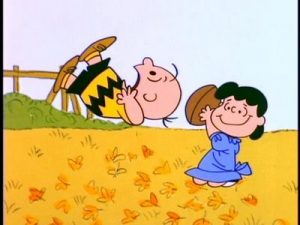 The below quotes explain it best with the football incident:

“every year in the fall Lucy would somehow manipulate Charlie Brown into trying again, only to pull the ball away to trick him. The most infamous example of this is the animated special It’s Your First Kiss, Charly Brown, where her actions (she pulled the ball away four times) cost the school football team a win in the Homecoming game, yet Charlie Brown is blamed even though he is clearly not at fault.”

“Lucy is frequently irked by her younger and more passive brother, Linus. In particular, she wants Linus to stop his attachment to his security blanket, and has even gone so far as to cut it up (to make shapes for a “flannelgraph” and later to make squares for Linus to clean his glasses with) and to steal and hide it. She once made a kite out of it and “accidentally” let go of it. The blanket flew around the country and people wrote to Linus to let him know they saw it. It was rescued by the Air Force when it flew out over the Pacific Ocean. Another time Lucy buried the blanket, causing a frantic Linus to dig up almost the entire neighborhood before Snoopy found it.”

In reality it doesn’t matter if they win or loose a conflict. They will always win in their mind because they can twist the facts around to meet their needs so well. This is where we, are normal functioning humans will always loose before even trying. The game is rigged so to speak. You could even say that just getting in the conflict in the first place is a win for them. Just being able to get someone pissed enough to ruin their day makes their day.

I have been trying for a long time to figure out just where to start with the sociopath. There is so much information and because this is her basic condition that causes her to do what she does, say what she says and view the world the way she does this will most likely be a very lengthy section. Therefore I will break it down into subjects like I have at a higher level in this writing until I can find a way to put it together and make it make sense. So it may not read like a book right now but it will eventually fall together that way.