I cannot think of a more obvious demonstration of proof in what I say than the actions Tenley choose to take. Think about it, if I were not telling the truth in this book Tenley and her lawyer would actually have a case, but the fact that they backed off when I pushed back and that she resorted to this ridiculous and utterly stupid tactic shows that what I say is the truth and that she understands how bad she looks making her capable of doing such a stupid thing. And the funny part is anyone who searches her name and sees the amount of stupid content that exists with her name all over it will inevitably become very interested and curious. So they will continue down the search results and eventually find this page and the truth. Really thought that one through didn’t she. I guess with the mentality of an 11 year old it made some sense. The fog of alcohol was most likely in influence as well.

“i am an OPEN book. go ahead. email everyone I know whatever you want. trust me, they will see you for the low life you are and love me anyway!”

So it turns out Tenley’s life is not such an “open book” because, when I opened that book, or this one, I was sent the following letter: 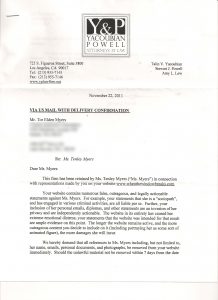 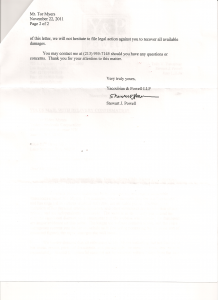 Something that I cannot help but point out is the fact that they are demanding I remove Tenley Myers name from www.whenthewindowbreaks.com. I would think if you’re so upset about a web page defaming your character you would at least demand it be removed from a web page that actually exists. Maybe Mr. Lawyer man should remove “pays attention to detail” from his resume. I mean really, where does she find these people? She goes through more lawyers then OJ ever had. I guess when you’re a sociopathic pathological liar you cannot hold onto one lawyer for very long. The relationship generally requires at least a nibble of honesty. After reading the letter, I actually wonder if he even read the correct web site.

In fact, I hope Tenley Myers understands that everything included will be gone over item by item with a judge to prove or disprove everything I state. That her case will be very hard to win considering everything I have in this book is backed up with her writing or enough witnesses for me to easily prove what I say. We will argue whether or not she is a sociopath. I am pretty sure any judge we go before will find her to be one, especially when you consider all the restraining orders she has had against her.  As we argue these items she will be digging herself a deeper hole because I will at that point have a judge siding with me on all the items that we will eventually argue in court anyways as the years of civil suites drag on. Besides that taking it to court will in fact make all of it public record. I doubt she is up to the task, but hell, in her words “GAME ON!!”

The funny part of all of this is the fact that she really does have a way out. It is really very simple for any rational human being. You just make me a liar. If I am lying about everything she has stolen, she could easily prove me wrong and I will be forced to take down the stories because at that point I wouldn’t be telling the truth. But she won’t do that because in reality she is not a rational human being, she is a broken and hurt little child. Her intellect is retarded to the point where she started taking heavy drugs and trying to break away from our father. So I hold no hope in ever seeing what she has taken. I will just continue to write my book, put things in order and then start after her in court to see where it leads. She has a very sad future when you consider that, but then again, no sociopath’s story ever has a happy ending. And I assume she will not have this same lawyer for all of it. Hmm, I wonder how she pays for all these lawyers.

After trying to bully me off the internet with her lame letter from a lawyer her next approach was something even I didn’t think she was stupid enough to try. But she went ahead and let her insanity fly and put her plan into action. The plan, from what I can tell was to get enough other content on the internet so that my book would eventually be pushed down the search engine results and fall off into oblivion. I cannot really confirm that it’s her that did it and for some reason I don’t believe she did it alone. I am pretty sure she had some advice from some “computer genius” but either way I can only assume it was her who did it. Who else would spend the time and money to create such an idiotic impression of themselves? If you think about it, anyone who searchers her, any reasonable human being that is, would see the insanity and idiocy right away. I mean, who does that? Either, she really likes her name, she is totally insane, she wants to hide something, or a combination of the above.

OK, here is a list of what she put out there on the net.  Keep in mind she spent money on the domain names and even spent the extra money to hide the fact that she is the one that indeed owns those domains. Hell, I want this book out there but would never be stupid enough to spend any more than one domain on it. Looking good.

tenleymyers2.co – Sorry, no web page, I guess she has not gotten to this one yet, but the domain was purchased.

Tenley also added some blogs with some really cute little, well stupid messages. They have been out there for a while but on December 27th of 2019 she decided to remove them from the internet. She removed them from a computer in the Colony Cove mobile village in Carson California. 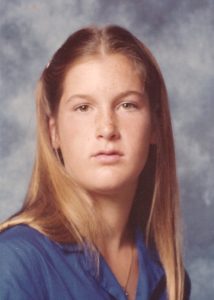