The Scorpion and the Frog

One day, a scorpion looked around at the mountain where he lived and decided that he wanted a change. So he set out on a journey through the forests and hills. He climbed over rocks and under vines and kept going until he reached a river. 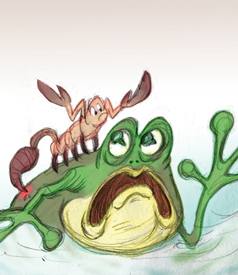 The river was wide and swift, and the scorpion stopped to reconsider the situation. He couldn’t see any way across. So he ran upriver and then checked downriver, all the while thinking that he might have to turn back.

Suddenly, he saw a frog sitting in the rushes by the bank of the stream on the other side of the river. He decided to ask the frog for help getting across the stream.

“Hellooo Mr. Frog!” called the scorpion across the water, “Would you be so kind as to give me a ride on your back across the river?”
“Well now, Mr. Scorpion! How do I know that if I try to help you, you wont try to kill me?” asked the frog hesitantly.

“Because,” the scorpion replied, “If I try to kill you, then I would die too, for you see I cannot swim!”

Now this seemed to make sense to the frog. But he asked. “What about when I get close to the bank? You could still try to kill me and get back to the shore!”

“This is true,” agreed the scorpion, “But then I wouldn’t be able to get to the other side of the river!”

“Alright then…how do I know you wont just wait till we get to the other side and THEN kill me?” said the frog.

“Ahh…,” crooned the scorpion, “Because you see, once you’ve taken me to the other side of this river, I will be so grateful for your help, that it would hardly be fair to reward you with death, now would it?!”

So the frog agreed to take the scorpion across the river. He swam over to the bank and settled himself near the mud to pick up his passenger. The scorpion crawled onto the frog’s back, his sharp claws prickling into the frog’s soft hide, and the frog slid into the river. The muddy water swirled around them, but the frog stayed near the surface so the scorpion would not drown. He kicked strongly through the first half of the stream, his flippers paddling wildly against the current.

Halfway across the river, the frog suddenly felt a sharp sting in his back and, out of the corner of his eye, saw the scorpion remove his stinger from the frog’s back. A deadening numbness began to creep into his limbs.

“You fool!” croaked the frog, “Now we shall both die! Why on earth did you do that?”

The scorpion shrugged, and did a little jig on the drownings frog’s back.

“I could not help myself. It is my nature.”

There is a tendency to attribute Tenley’s issues to her addictions but when you strip them away she is still the same. She says and does the same things. She in fact understands how people react to her when you talk about rehab. She can convince you to write off what she said, the craziness you just went through, to her addictions. She can blame the drugs, in turn keeping the blame off herself.

This fable has always helped me to deal with Scorpion because it always reminded me that no matter what I do, no matter how much I extend myself I will get stung. I always have and always will. Even when she had me convinced that she had gone through rehab and come out OK. When she said “back when i was mean” I actually thought she understood what she meant. But in reality she was only repeating what she had heard in rehab and sober living. She was just reflecting back, like she always has, on what others were saying. After all, she is just doing what she does.

The fable also points out that the scorpion is predictable. If you can just remember the scorpion is just a scorpion you can predict when the next sting is coming and get out of the way.

What has always been so compelling to me about the fable is the fact that I am the frog. The fact that time after time I let the scorpion talk me into taking that trip together. I ignored my own instincts and let myself be talked into things that I never should have let happen. I always forgot about the fable. When it happens I go through such a hard time because I end up feeling so violated. But the only person I have to blame for it is myself. I let myself walk into it over and over and over. Like that poor little frog. Because in reality what crossing the river meant for me, was that a smooth ride and successful landing on the other side meant some kind of normalcy with Scorpion. Something my friends had with their siblings. Something i always admired and found myself jealous of.

Because I grew up with the two of them I became a people pleaser. This set me up to always fall for her games. After all as a people pleaser you think more about what you can do to make the other person comfortable and less about protecting yourself. I had to come up with some way to remember the fable if I was ever going to break that pattern. I had to create a trigger for me to remember that trusting the scorpion will surely get me stung. So I did the easiest thing I could and just started calling her Scorpion. Now that I have internally changed her name to Scorpion I always find her predictable because I am always thinking from the right frame of mind. I am not the same frog that used to just go along.